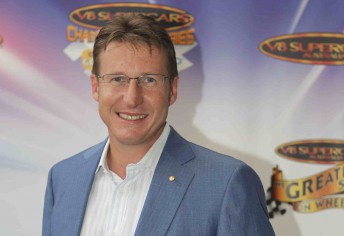 Mark Skaife, Neil Crompton and Mark Larkham look set to get V8 Supercar seat time this year as part of their roles on the Channel Seven commentary team.

The three champion drivers-turned talking heads are likely to drive V8s as part of the pre-race preview, bringing the viewer into the inner-sanctum of a V8 Supercar.

Last year at Townsville and Sydney, Skaife christened the new circuits by driving the Sprint Gas Racing and Team BOC Commodores respectively around the tracks.

This year, it looks like Skaife, Crompton and Larkham will get the chance to do that at every round of the championship as part of Seven’s pre-race coverage.

Skaife, who will drive with Craig Lowndes in the TeamVodafone Holden Commodore at the L&H 500, Phillip island and the Supercheap Auto Bathurst 1000, told Speedcafe.com.au that the pre-race previews were going to be beefed up this year – with the viewer in mind.

“We had a very productive day on television planning last week, and a lot of work is going into comprehensively previewing the races,” he said.

“We do a very good job at the moment of explaining each of the nuances of each event – the rules of the weekend, soft tyres, fuel stops etc. We do a pretty good job of that by doing what we call ‘the proper racing line.’ (Where the commentators walk around the circuits and dissect each part of the race track.)

“We look at the intricacies of the circuit, where the cars need to be good, where they can’t be bad, the difficulties, what style is needed and what the set-ups are like for each of the circuits.

“There’s a lot of detail to go through to help convey how the cars actually correlate on the circuits.”

Skaife said it’s all about keeping the preview sharp and simple.

“If you’re in the lounge room and flick the television on to watch the preview of a V8 race, you want to know what the weekend entails, what the circuit’s like, and what the cars are like at that particularly place,” he said.

“We are going to take you further into that, without being too technical about it, but we’re going to explain in greater depth the requirements from the teams to get the most of the cars that weekend.”

Even though the amount of laps would be limited in the session, Skaife said that he can gauge enough of a feeling from the car to understand its general behaviour.

“Steering feel, pedal weights, heat inside the car, what the engine characteristics are like, gear change, the overall balance of the car – all the things that you can feel, there’s a stack of stuff that is really pertinent for the viewer,” he said.

At this stage, Skaife is likely to drive one of the Jack Daniel’s Racing Commodores at Abu Dhabi, and a TeamVodafone Commodore at Bahrain.