Holt: We couldn’t have won in the dry

Holt: We couldn’t have won in the dry 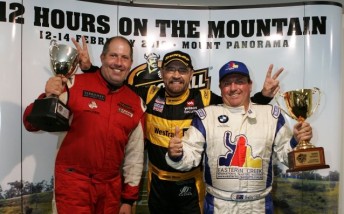 Armor All Bathurst 12 Hour winner Garry Holt says that his team had no chance of winning the race – until the heavens opened up.

The Eastern Creek International Kart BMW 335i, driven by Holt, Paul Morris and John Bowe, was dealt a major pre-race blow when the G-sensor failed on the car, forcing it into limp mode early in the weekend.

The original G-sensor was programmed in Germany, and after liaising with the technicians in Germany, it was decided to replace the unit, which the team sourced from BMW’s Sydney dealership.

The new unit worked fine, but Holt says that it wouldn’t have been good enough to compete with the fast Mitsubishi EVOs on The Mountain.

“I thought it was all over for us from first practice, but the wet race certainly played to our advantage,” he said today after his team’s win.

“We weren’t going to win in the dry. There was no way. We might have finished in the top five, but there’s no way we would have been able to beat the EVOs. The way the car was before the G-sensor went, we would have definitely had a chance, but once it failed on us, the game was up for us in the dry.

“What happened was the g-sensor in the car had failed and the car didn’t know it was on the race track. When it starts pulling the Gs, especially at Bathurst where you’re at 100 percent throttle for a lot of the lap, it was only giving us five percent throttle. We got a new G-sensor from BMW in Sydney on Friday afternoon, but we put that in and we knew the game was over for us in the dry.

“On one lap, we might do 2m31s, then the next driver would step in, do everything the same and he’d do a 35s. We were praying for the wet. I went out there in the wet on the Saturday morning and I was third quickest. It felt like it had a lot more power in the wet.”

Holt says that that yesterday’s win is “on par” with his first win in the 12 Hour with Morris and Craig Baird in 2007.

“We had dramas leading up to this race in preparation with things going wrong. We had a new engine that we had trouble trying to tune it, plus teh G-sensor problem. We had a lot of long nights and only a couple of hours sleep over the weekend.

“I guess, things worked out well and it’s great to get the win.”

The g-censor is heading back to Germany now to be reprogrammed before Holt continues his Australian Manufacturers Championship defence at Symmons Plains (April 10-11) as part of the Shannons Nationals.

Fellow Bathurst winner Morris was equally impressed with the win on the weekend.

“I didn’t think we’d have a shot with the speed of the EVOs, but they kept breaking, and we drove our car pretty hard and everything was perfect. There were no great problems in the race for us.”

The win is Morris’ second in the 12 Hour with Holt’s BMW team. In fact, all of Morris’ major Bathurst success has come in BMWs. He won the 1997 Great Race (before being disqualified when team-mate Baird drove too many laps). He made up for that when he won the 500km Super Tourer race at Bathurst in 1999.

It seems all of ‘The Dude’s’ success at Bathurst is in BMWs, leading him to suggest this …