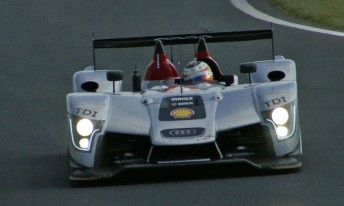 Audi has named its driving line-up for its attack on this year’s Le Mans 24 Hour as it aims to win its ninth victory in 12 years.

But to do that, it will have to overcome Peugeot, who won last year’s race.

The teams will drive the diesel-powered R15 TDI. All three Audi’s are entered by Audi Sport Team Joest. The third sports-prototype will officially run as ‘Audi Sport North America,’ the name under which it was nominated.

The # 7 entry of Capello, Kristensen and McNish teamed together in 2008 to win the classic French race, and with eight wins under his belt, Kristensen (42) is the most successful Le Mans driver of all time.

Can the line-ups bring Audi back to the winners circle?

“We are pleased that the ACO has accepted our three nominations for the world’s most important sports car race and that we will again be able to compete with three cars,” says Head of Audi Motorsport Dr. Wolfgang Ullrich.

“Our stated goal is to bring back the Le Mans trophy to Ingolstadt and Neckarsulm. Three cars mean three chances – and we feel that all three R15 TDI cockpits have been filled with top-class drivers.

“I would like to thank our colleagues from Porsche for again making two of their best drivers – Timo (Bernhard) and Romain (Dumas), with whom we were very pleased at their first Le Mans race for Audi – available to us.”

The roll-out of the R15 is scheduled for the end of February before an extensive testing program. The car’s first racing commitment will be at the eight-hour race at Le Castellet (France) on April 11.

Audi also plans to participate in the newly-incepted Le Mans Intercontinental Cup featuring races in Great Britain, the United States and Asia with two R15 TDI cars. The Cup will compete in a worldwide racing series for Le Mans sportscars to be staged from the 2011 season onward.