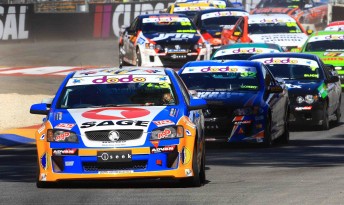 Celebrating the 10th anniversary of the series that launched at the Adelaide event in 2001, the two-driver format will see regular series drivers paired with celebrity co-drivers, with the final race to be televised live featuring a driver change.

As per V8 Ute tradition, McConville has adopted a nickname for the weekend, and ‘Conkers’ is keen to sink his teeth into the new challenge.

“I know enough about Gary Baxter through his advanced driving and commentating his racing in the Utes to know that we’ll be extremely competitive,” he said.

“The Sage Team is very professional and I’m sure we’ll have a great weekend.”

Baxter is looking forward to having McConville on board.

“I’m thrilled that Cameron has joined us for the series kick off,” he said.

“The experience and versatility he brings to our operation is enormous. His experiences in open wheel competition, Super Tourers and of course his success in V8 Supercars is well documented.”

Rally driver Rick Bates will also join the line-up of the special race. Bates haso dabbled in circuit racing in the past and will join the Jesus All About Life Racing Ford BF of Andrew ‘Fishtail’ Fisher.