Fiore looks to Patrizi for enduros

Fiore looks to Patrizi for enduros 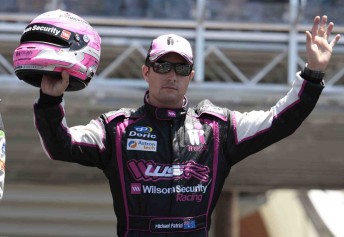 Team owner/driver Fiore was guarded about confirming Patrizi’s involvement with Triple F in the enduros, but told Speedcafe.com.au that he is the ‘man most likely.’

“He did a couple of in and out laps, giving the boys a few practice pit stops. He did another run after that and was really good – as I would expect.”

It was the first test session for Triple F Racing with all of the team present. After purchasing the ex-Fabian Coulthard/Wilson Security Racing Falcon at the end of last year, Fiore did a ‘systems check’ test at Queensland Raceway in December, but Tuesday was the first time all of his crew had the chance to work with each other at a race track.

Fiore finished the day fifth overall and was impressed with the way that the team members gelled.

“At the end of the day, we went four or five tenths faster than I’ve ever been around there. It was good to work with the boys, everybody worked well together and we learnt a lot about the car,” he said.

“(Engineer) Leigh (Geyer) already knows quite a bit about the car – he worked on it last year with Fabian. He was encouraged by the feedback I was giving, so it was a definitely a successful day as a first outing for everyone – We got done what we had to do.”

After an encouraging first day, Fiore says his confidence has been boosted for the upcoming season.

“Queensland Raceway isn’t the hardest track to drive around, and I’ve done enough miles around there – I should be able to go half alright,” he said.

“It’s not a real indication on how we’re going to go for the year, but it’s definitely a step in the right direction and it gives me a little more confidence heading into the Middle East rounds.

“I know that the equipment is good enough to do the job, but it’s just about marrying me up to the car and put it where it should be.”