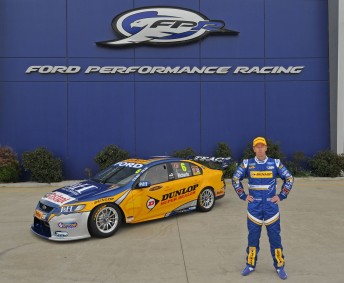 Steven Richards with the Dunlop Super Dealers FPR Falcon he will campaign in 2010. Pic: Joel Strickland

Ford Performance Racing has announced today that Dunlop Super Dealers will become the naming rights sponsor for the FPR Falcon to be driven by Steven Richards in the 2010 V8 Supercar Championship Series.

While Dunlop is a long term supporter of V8 Supercars and has been the series control tyre supplier since 2002, the Dunlop Super Dealer sponsorship is a first for the tyre retailer.

“This partnership marks the first time the Dunlop Super Dealer retail network has come together to be involved in the V8 Supercar Championship Series,” said Phillip Cavagna, Vice President of Marketing, Dunlop Tyres.

“We are extremely excited to be the naming rights sponsor on Steven Richards’ number 6 Ford Performance Racing Falcon for the 2010 Series, as well as to have Dunlop continue our ongoing partnership of the entire FPR team.

Dunlop had been a supporter of Ford Performance Racing since the team’s inception.

“Dunlop has been a proud and active sponsor of FPR since the team’s creation in 2002, so to see a fully livered Dunlop Super Dealer FPR Falcon on the track in 2010 reflects the value we both hold in this relationship,” said FPR Team Principal Tim Edwards.

“It’s pleasing to see an existing, blue chip sponsor stepping up to take on naming entitlements.

“In many ways it’s a logical step, Dunlop is obviously aware of the commercial advantages of owning a competitive car – we can now take this long standing support to the next level.”

Taking over the naming rights of Richards’ entry in the championship is a perfect fit for the tyre dealer as the popular driver has been an ambassador to the business for several years.

“Personally I couldn’t be happier; I’ve done a lot of work with Dunlop Super Dealers over the years, so to have my car emblazoned with their colours is brilliant,” said Richards.

“I’m definitely looking forward to the new season; I’m expecting the Dunlop Super Dealer FPR Falcon will be a contender this year.”

Richards will take the track in the Dunlop Super Dealers colours for the first time in Abu Dhabi next week.