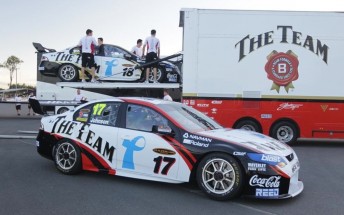 And with the Ford Motor Company expected to announce today that it will rejoin the famous Queensland team as a sponsor, it’s a win-win week for DJR in terms of sponsorship.

Kel Constantine, Sponsorship and Events Manager, Beam Global Australia is thrilled with the partnership and the opportunity it provides Canadian Club and Webb.

“Jonathon’s passion and commitment to the motor sport industry became evident last year in the endurance races with Jim Beam Racing and also his determination in the Fujitsu Development Series,” Constantine said.

“This became something we wanted to be a part of too. His fresh approach and the energy he brings to both DJR and the Championship Series is a perfect match for Canadian Club.”

“Signing with Canadian Club is an amazing opportunity and I am already enjoying working with DJR to ensure we set the bar high for another big season,” he said.

“I feel comfortable on the track following my win in the 2009 Fujitsu Series and endurance races and am looking forward to competing with the best drivers in Australian motor racing.”

Due to the alcohol advertising restrictions for the first two rounds of the V8 championship in Bahrain, Webb will join his DJR team-mates in an alternative livery to support the Prostate Cancer Foundation of Australia (PCFA).

All three DJR Falcons will be completely branded with the Prostate Cancer Foundation’s blue ribbon, as seen at Queensland Raceway yesterday at the test day.