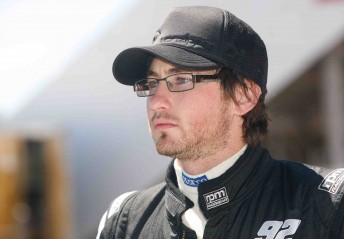 Young Fujitsu V8 Supercar driver Taz Douglas has been forced onto the sidelines after being diagnosed with Burkitt’s lymphoma last week.

The Victorian, who turns 25 tomorrow, was admitted to the Alfred Hospital in Melbourne last Thursday and is undergoing chemotherapy for the cancer.

Burkitt’s lymphoma is cancer of the lymphatic system, an important part of the body (located in the neck) that helps fight infection.

Douglas discovered a lump in his neck late last year, which was removed by the doctors. Further tests revealed that the lump was cancerous and immediate action was taken.

Douglas, renowned for his likeable and laid back attitude, told Speedcafe.com.au that this is one life hurdle that he isn’t taking lightly.

“This is the biggest test that I’ve ever had,” he said.

“Usually I’m pretty relaxed about life. If an engine blows up or I crash, I say “no worries!” I know how serious this is and I can’t take my usual approach to it.

“(The cancer) is not anything I’ve done, it’s just bad luck. I’m having chemotherapy and I should be OK in the next few months.”

Douglas said that he is feeling OK now, but is more than confident he’ll be back behind the wheel of his race car soon.

“I’m feeling alright at the moment, but it’s all a bit much to take in. I was meant to be testing at Winton on Monday, but instead I’m in hospital,” he said.

“Going through chemo takes its toll. I’ve had no side affects at the moment. This type of cancer has a 90 percent cure rate, and all the doctors are pretty confident that I’ll be cured after three cycles of chemo and then I’ll be back into it.

“It’s a hurdle, but looking at the race calendar, I’d need everything to go absolutely spot on, see how my strength is, and maybe I could do (Round 3 at) Winton. That’s a big maybe at the moment, so the next round at Townsville is a more accurate round that I could come back.

“I’m just staying positive, deal with it now and then I’ll get back out on the track.”

Douglas will be at the Alfred Hospital for the next three months undergoing treatment. If the treatment is progressing well, he will be allowed to spend time at home for one week each month.