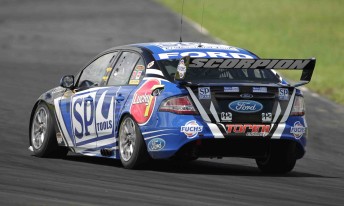 Stone Brothers Racing team principal Ross Stone says that ending the first test day of the year on top is the best possible way to start 2010.

Stone told Speedcafe.com.au that the team entered the test with a plan, and the reaped the reward.

“We’re quite happy with Shane. In the morning, when the track was at its best, which usually is before 9.30am, we just ran in all of our gear ratios for the Middle East races,” he said.

“We had a plan and we stuck to it, and at the end of the day, we came out pretty close with the #18 (Courtney) car, but we ended up on top, so we’re pretty happy.”

Both drivers worked with their new engineers, and while Stone was happy with their efforts, he said they both chased old tyre set-up and couldn’t get the most out of the new control tyres that most of the top teams used at the end of the day.