Murph: Missing round “my worst nightmare”

Murph: Missing round “my worst nightmare” 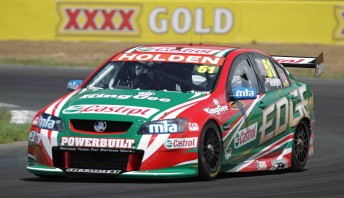 Greg Murphy has said that missing the first round of the V8 Supercars Championship Series is like his worst nightmare coming true.

Due to a prearranged engagement with the Top Gear Live show in New Zealand, Murphy will be in Auckland, sharing the stage with Jeremy Clarkson and James May, while the rest of the V8 Supercars kick off the first round of the championship in Abu Dhabi.

Murphy was part of the NZ’s inaugural Top Gear Live show last year and re-signed to return to the show soon after. Later on, V8 Supercars announced an early start to the 2010 season overseas, putting him in a frustrating position.

“It’s not a great subject to talk about, to be honest. It’s really disappointing that it’s worked out that way,” he said.

“I had a great time with the Top Gear guys last year and signed the contract sometime ago before the calendar was announced here.

“Really, it’s a race car driver’s worst nightmare, or any sports person who has a clash like that.

“I’m not giving up on car racing. It wasn’t a choice I made. It was a decision I made before I had the numbers, dates and facts, and unfortunately, that’s where we are at.

“I’ll join the circus in Bahrain and get stuck into it. Everyone will have a bit of a head start on us, but we’re expecting good things this year.”

Murphy had his first drive of his Castrol Racing Commodore VE – prepared by Paul Morris Motorsport – at Queensland Raceway yesterday, and he was suitably impressed.

“Getting into a new car, new guys, new crew, it always takes a bit of time, but straight away in the car, I felt comfortable. I felt like I’d been driving the car for a while,” he said.

“Obviously, all the cars do things different on the race track, and this one seems very good in the high-speed stuff. We’re just learning about the changes that we are making with the car and the way they affect the car.”

Murphy will start the year in team-mate Russell Ingall’s PMM-built car from last year before debuting his new Triple Eight-constructed chassis at the Clipsal 500.

“Going to Triple Eight chassis is a big deal for the team,” he said.

“Even though we expect the Triple Eight cars to be very good, it’s a learning process for Russell and his guys that have been working for the last few years on a Paul Morris Motorsport-designed car.

“There’s some big changes, but we’re expecting to get on top of these things pretty quickly, and the relationship between PMM and Triple Eight will be a good one.”