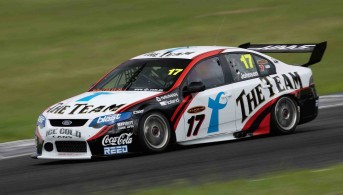 Dick Johnson and Ford are together again.

Jim Beam Racing will compete this year with direct factory support from Ford, in addition to the engineering and technical assistance the team received during 2009.

The DJR cars competed last year without any financial support from Ford – the first time the blue oval did not back Johnson’s race team in nearly 35 years of racing.

The new financial package for DJR will see the Ford logo and corporate branding make its return to the Jim Beam Falcons. Discussions between Ford Australia President and CEO Marin Burela and Jim Beam Racing team co-owner Charlie Schwerkolt have been ongoing since November, and on the eve of the first rounds of the V8 series in the Middle East, Burela was pleased to welcome them back to the Ford family.

“Ford is extremely pleased to be able to expand its partnership with Jim Beam Racing for 2010 and offer the team enhanced support for the upcoming season,” Burela said.

“Dick Johnson is an icon of the sport and a motorsport legend. His name and his team have been synonymous with the Ford brand over a long period of time, so it’s fitting that we can continue to be so inextricably linked in the world of motorsport in Australia.”

Schwerkolt said that the team’s strong performances at the end of 2009 were a major help in reviving financial support from the blue oval.

“The discussions with Ford, in particular Marin Burela, have been refreshing and our performance on track in 2009 has certainly helped in our discussions to re-engage in 2010,” said Schwerkolt.

“It is such a positive move by Ford to increase its support of the team and, in turn, its ultimate support of the V8 Supercar category as a whole, and we look forward to a great partnership in 2010.”

Johnson, who made his name in Australian motorsport driving Ford motor cars, was pleased to be back as a factory-supported team.

“This team and I have had a long association with Ford and I am very pleased that we have been able to enhance that partnership this year,” he said.

Jim Beam Racing’s new livery, including Ford branding, will be seen for the first time at the V8 Supercars season launch in Sydney tonight. It will make its track debut at Abu Dhabi next week, with a special livery designed for the Middle East rounds.