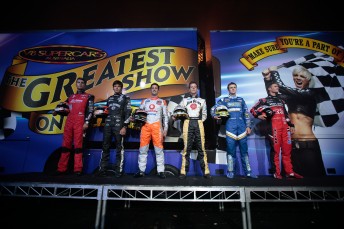 The V8 Supercar drivers that feature in the 2010 Television Commercial

The making of the 2010 V8 Supercar Championship Series television commercial is the work of a crew of more than 150 personnel who have impressive credentials across every department.

Sound Recordist, David Lee, won an Academy Award for his work on The Matrix, the Special Effects were done by the team who brought us The Matrix, and Stunt Co-ordinator, Harry Dakonalis, worked on both Mao’s Last Dancer and The Matrix.

Wardrobe was directed by Eliza Goodman who has Australia and Moulin Rouge amongst her credits, Set Design was co-ordinated by Martin Oneil, of Mad Max fame, and Hair & Make-up was done by make-up artist to the stars, Rae Morris who P!nk has since flown to LA to work with her on other projects.