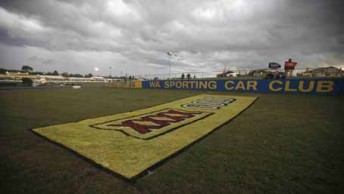 The West Australian Sporting Car Club has reacted with venom to V8 Supercars’ announcement yesterday that Barbagallo Raceway’s round of the V8 Supercars Championship Series was axed from this year’s calendar.

V8SA released a statement late yesterday, labelling track’s facilities at the West Aussie track as “third world” and claiming that despite a reduced sanctioning fee of around 25 percent of the cost to race at the circuit, a deal could not be reached.

West Australian Sporting Car Club Chairman Rick Gill told Speedcafe.com.au that the sanctioning fee was the sole reason for V8’s decision to cut the fifth round of the championship, scheduled for June 4-6.

“Yes, sanctioning fees is an issue – and the only issue,” he told Speedcafe.com.au

“The last correspondence we had was regarding sanctioning fees. They asked us to respond to them by 9am (today). They have jumped a day earlier, and decided to can the event without our response and have abandoned their deadline date.

“If your business partners are working together for a common cause, you’d think it’s poor form and bad manners. It probably falls along the lines of the bullying attitude that they have dealt other promoters around Australia.

At the last round of the V8 series at Barbagallo in November last year, the WA government, WASCC and V8SA confirmed it was negotiating a new five-year deal to see the V8 series return to the track from 2011 onwards at a revamped facility.

Currently, plans are still in place to see the entire Barbagallo Raceway refurbished, lengthened and modernised.

According to Gill, the new deal would see the circuit upgraded for the 2011 event, with the WASCC set to receive a $5 million grant from the government to kick-start the facility upgrade.

“A five-year contract that V8s presented us stipulated that the upgrades had to be in place by 2011,” he said.

Gill said that he wants to see the V8s return – possibly as soon as this year at its proposed date – but the next step will be critical.

“The step from here is to continue on negotiating with the V8s, as promised, and respond to them as we would normally regarding the issues with the event. We want to continue on, unless otherwise advised,” he said.

“I assure you that the Sporting Car Club and the government want to see the V8s here.

“The V8s is a terrific show for the WA public and for the club, but it’s not the most important event. The Sporting Car Club runs events 350 days a year, which is ongoing business. It is only the three days that the V8s take the track time.

“Is it important? All events to the Sporting Club are important. Does the track rely on the V8s? No it doesn’t.”