Johnson locked in at DJR until 2011

Johnson locked in at DJR until 2011 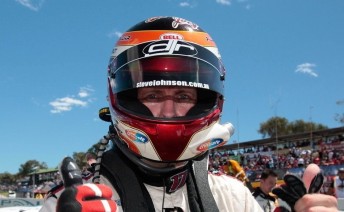 The new deal secures Johnson at his family team until at least the end of the 2011 season, with options.

Johnson is one of the longest ‘one team’ drivers in V8 Supercars history and ensures the iconic Johnson brand continues under the Dick Johnson Racing umbrella.

The new contract comes after a strong 2009 series which netted Johnson sixth place overall in the championship.

“Last year was a very satisfying but critical year for me and I am really pleased to continue with this great team,” Johnson said.

“The team did a great job last year – we had new equipment and our crew was really on top of their game. So, to move on with an even stronger focus for this season and beyond is the springboard I really wanted for more success.”

Steve’s three-time Bathurst-winning father Dick was pleased to lock his son into the deal.

“I made no secret last year at the beginning of 2009 that we all had to perform to get back to where I wanted the team to be,” he said.

“That includes our drivers. Steve lifted his game and really put together a strong season. Why wouldn’t we want to secure him again?’

Johnson will once again drive the famous #17 Ford in Jim Beam Racing colours, alongside James Courtney and Jonathon Webb in the expanded three-car team.

The V8 Supercars Championship Series kicks off in Abu Dhabi at the new Yas Marina Circuit on February 18-20.