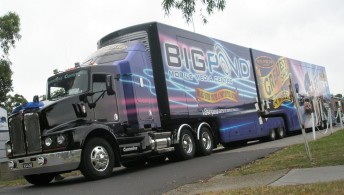 The photos, supplied by an anonymous happy-snapper, reveals the livery that the V8 trucks will carry at all Australian rounds of the Championship Series.

The trucks feature the new slogan “The Greatest Show on Wheels’ which will be part of the new advertising campaign that will be launched in Sydney tomorrow. 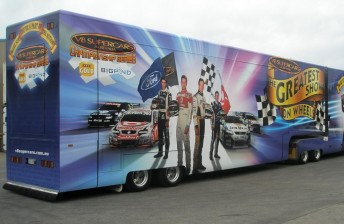 Also set to be unveiled is pop star ‘P!nk’ as the voice behind the series, with her tune ‘Get the party started’ as the song that will be associated with Australia’s leading motorsport category.

Most of V8 Supercars’ drivers will be in Sydney for the launch tomorrow.