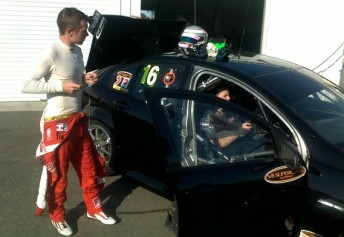 Dale Wood is steering the unsponsored #16 Kelly Racing Holden Commodore VE at Winton Motor Raceway today – the only entry yet to lock in a driver for the 2010 V8 Supercars Championship Series.

Wood drove with Kelly Racing last year in the first five rounds of the V8 championship before Mark McNally took over the drive of the Hi-Tech Oils-sponsored car.

At this stage, no driver is confirmed for the seat #16 seat, although Wood remains in the frame as a possible driver – among others.

“The car has been completely apart over Christmas. It’s had some changes made to it, so before the first round, it needed a shake down, to make sure it’s ok,” Wood said.

“There’s was no one around to do the test, and I was happy to put my hand up. Hopefully things go from here and I get back in the car for the Main Series. There’s still a bit of work to be done and a few boxes to be ticked.”

With only 11 days before the cars hit the track in Abu Dhabi, a driver must be found soon. Wood, an employee at Kelly Racing, is certain a driver will be found.

“It will be a case of better late than never!” he said.

“Nothing like a last minute deal, but something will come off, and if not for me, it was good to get the rust off and make sure the car was OK. The car is great too. The car couldn’t be better.”