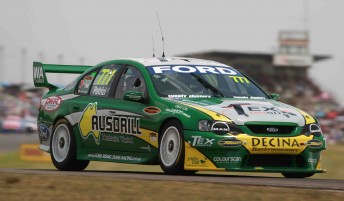 Ford Rising Stars Racing has been revived, and James Moffat will be the driver of the reborn team in this year’s Fujitsu V8 Supercar Series.

The FRSR concept was developed by driver talent-groomer Jim Morton in 2007. Michael Caruso drove the car that year in the Fujitsu V8 Series (finishing second in the Fujitsu Series) before Morton moved the team up to the Main Series with Michael Patrizi as the driver.

The FRSR team was benched last year and Morton has been trying to sell the Falcon over the past 12 months – with no success. Moffat’s employment at FP, and his desire to race in the Fujitsu Series has seen Morton revive the junior driver concept.

The Norton 360 FRSR Falcon will be prepared out of the Ford Performance Racing at its Campbellfield, Victoria, factory.

Moffat will also be part of the Ford Performance Racing’s endurance driver line-up.

Moffat finished second in last year’s Fujitsu V8 Series, driving with Sonic Motor Racing, and he hopes his new association with FPR can take him one spot higher in 2010.

“It’s a great opportunity for me to learn more,” he said.

“This time last year, we decided to have a go at the development series with Sonic, and we had absolutely no budget. We were putting everything we had in it to try and make it work. I was very fortunate halfway through the year to pick up some backing from Norton.

“Originally, that was only going to be for Sandown, but fortunately, the supported me for the rest of the year, and they are backing up again this year. It wouldn’t be possible without their support.

“I’ve also got assistance from Toshiba and Boylan Traffic Solutions this year, and I can’t believe it, it’s February and I have most of my finances in line!

“It’s a fantastic opportunity to be doing it out of FPR with Jim Morton’s Ford Rising Stars program, and I’m really hoping I can go one better than last year.”

Moffat will compete with the #99 – a tribute to his famous father who did a lot of his racing (and winning) with #9 on his doors.

“I’ve always tried to have 9 as my race number – hat was dad’s most recognised number. It’s nice to be able to run 99 this year, and hopefully it will be up the front.”