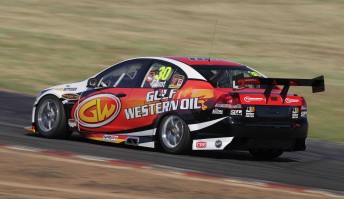 James Davison did not get a chance to get his first laps of a V8 Supercar at Winton Motor Raceway today.

The 22-year-old was pencilled in to drive the #30 Gulf Western Oils Racing Commodore VE – run by new team Lucas Dumbrell Motorsport – but due to time constraints was spent the day as a spectator.

“There was always a possibility that I wouldn’t get a chance to slot in,” he said.

“For Day 1 as a new team, it was important for them and for Daniel (Gaunt) to get as many laps as possible. It’s a little disappointing, but hopefully we can organise something at a later date, get some laps in the car and make a positive impression.”

The LDM team utilises an ex-Walkinshaw Racing VE chassis, and as part of the hand over of the car, former full-time WR driver David Reynolds shook the car down for a few laps in the morning.

For new team owner Dumbrell – the youngest-ever V8 Supercar team owner – he was happy with the way his driver Gaunt progressed.

“Daniel did a very good job,” he said.

“He’s only had limited laps in a V8 Supercar, and he’s doing well. (Engineers) Pete Smith and Matthew Crawford are working well with him, and team manager Dean Orr is running the team faultlessly.

“Overall, I’m pretty happy with it and I hope it’s a sign of things to come for the season. We just want to do a consistent job and keep it clean.”