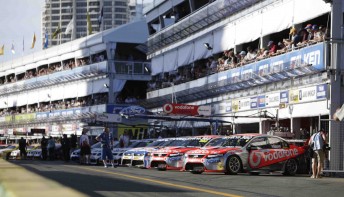 There has been clarification on the initial rules for the inaugural Gold Coast SuperCARnivale that will see 18 international race drivers slot into each V8 Supercar team for the three-day October (22-24) event.

The rules clarify that each ‘team’ must use their international drivers in each of the two 300km races and that the primary driver of each car must remain with their car. This means that regular championship drivers will not be able to be teamed up (as per the other two endurance races).

Other additions to the rules include an exclusive test for international drivers at Queensland Raceway the week of the SuperCARnivale.

“By March 19 we will have our full list of 18 international drivers to be assigned to all teams and in April at our major event launch we will announce both the driver and his allocation.”

The rules as agreed by the Board include:

1. International drivers to be confirmed and in place by no later than Friday 19th March 2010.

2. Each REC (licence) holder must have an international driver acceptable and agreed by V8SA.

3. All international drivers will be afforded a test day at Queensland Raceway on Wednesday 20th October 2010.

4. There will be a special practice session (not race) for international drivers only on the Friday afternoon at the Surfers Paradise circuit of at least 30 minutes duration.

5. The current endurance primary driver rule implemented this year for Phillip Island and Bathurst will apply to the Surfers Paradise Event. This means the primary driver must remain in his car.

7. The co-driver, including international drivers, must do at least approximately 30 percent of each race, Saturday and Sunday.  Exact details to be confirmed once fuel stops are accurately calculated and advised in the supplementary regulations.

8. Each team (2 or 1 car) must have a least 1 international driver.  For the purposes of this rule, teams will be recognised as those nominated for the VCS Teams Championship (Rule D15.5) i.e. a 3 car operation will be counted as a 2 car team and a 1 car team.

As part of the revamp of the event it has been reduced to three-day and the track shortened to 2.96km.

The event will become the third endurance race on the calendar alongside the L&H 500 at Phillip Island and Supercheap Auto Bathurst 1000. It will be raced over 600kms, 300kms each day, with each V8 Supercar team including an international co-driver