Moffat has been confirmed with the team for both the endurances races, and with the FPR-prepared Ford Rising Stars Racing team (CLICK HERE for story) in the Fujitsu V8 Series.

Youlden and Canto rejoin the team after driving with the factory Ford outfit for the past two seasons. 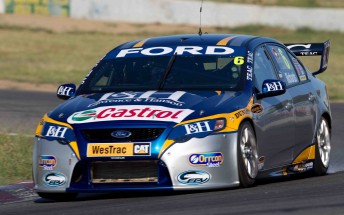 Steven Richards at Winton. His #6 FPR Falcon features no major sponsorship today, but is set to be announced on Thursday

There are no confirmations yet on which endurance driver will be paired with FPR’s regulars (Mark Winterbottom, Steven Richards and Paul Dumbrell) however a logical fit would see Winterbottom paired with Moffat, Richards with Youlden and Dumbrell with Canto.

Team principal Tim Edwards told Speedcafe.com.au that continuity is a key for his Phillip Island and Bathurst campaigns this year.

“It’s great to have Luke and Dean back. The continuity will count for a bit, and bringing on some youth with James means that we have a good mix,” he said. Paul Dumbrell in The Bottle-O Racing entry at Winton today. Expect to see Dumbrell partnered by Dean Canto at Phillip Island and Bathurst

“All three of them know The Mountain. We have to sort out who drives with who. There’s a bit to go through there, but after a few test days, that will gravitate towards who is the best fit.

“We’ve got to take in sizes. We’ll see. Dean and PD can actually sit in the same seat. That’s a huge plus to take into consideration.”

Moffat will be a Bathurst rookie, and has a great opportunity to conquer Bathurst in what will be the 40th anniversary since his famous father Allan first won The Great Race in 1970.

“It’s a massive opportunity for me. I couldn’t really get handed a better chance. To be doing my first enduros with the factory Ford team is almost a dream come true,” Moffat said.

“It’s been 40 years since Dad first won his first Bathurst in 1970. Obviously there’s history there, and with Ford, all those years ago. Coincidently, Dad just signed on to be an ambassador for FPV …

“I’m really looking forward to learning off the guys like Richo and Frosty. It’s a chance for me to see what I need to do to make that next step.”