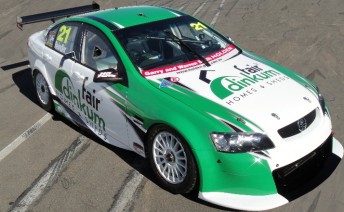 Reindler will drive the #21 Holden Commodore VE, run by Brad Jones Racing from its Albury workshop.

Fair Dinkum Homes and Sheds is no stranger to Australian motorsport and the V8 Supercars Series having previously had sponsorship deals with Sprint Gas Racing and the late Peter Brock and plans to expand the brand’s profile with the announcement of the new naming rights sponsorship.

Brad Jones, co owner of Brad Jones Racing is delighted to welcome Fair Dinkum Homes and Sheds to the team.

“The signing of Fair Dinkum Homes & Sheds completes a great off season with three great brands now associated with the team,” Jones said.

“Fair Dinkum Homes and Sheds has realised the commercial value of a V8 Supercar marketing campaign through their previous sponsorship deals and we’re pleased to have them onboard as the naming rights sponsor of Karl Reindler’s #21 Commodore.”

Travis Griffin from Fair Dinkum Homes and Sheds sees the new sponsorship as wonderful opportunity to increase the brand’s awareness.

“We’re excited about the increased exposure that this sponsorship will create for our brand and our distributors during 2010,” he said.

“Karl shows a lot of promise as a driver and we look forward to supporting his and the teams success during the season.”

Reindler has hit the track for today’s first V8 Supercars’ test at Winton Motor Raceway. Stay tuned to Speedcafe today for all the latest news and updates.