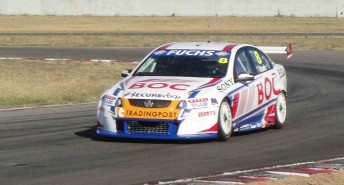 V8 Supercar regulations allow for newly-constructed cars to complete a 20 lap shake down where team engineers and mechanics can complete a systems check of the new chassis and components.

The session does not count as one of the four test days teams are allowed to complete during the V8 Supercar season.

Richards completed 15 laps, running in short bursts of two or three laps. All systems checks on the car’s set up and brand new Noonan engine were completed without incident.

The two previous BJR Commodores were completely built by Walkinshaw Racing. The new chassis that Richards will campaign this year was constructed by WR, but built in-house by the Albury-based team.

The other two chassis will be driven by Jason Bright and Karl Reindler in an expanded three-car BJR team.

Richards was rapt with the performance of the brand new car.

“First thoughts of the car is it’s to going to be awesome,” he said.

“The shakedown tyres were average so it’s hard to determine the outright pace of it, but it certainly felt very nice with no problems so we’re gunning for a very successful test day for this new Team BOC race car on Monday.”