No extra pressure for Winterbottom

No extra pressure for Winterbottom 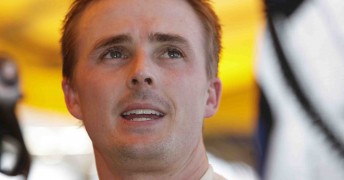 Mark Winterbottom is considered by many to be Ford’s best hope of taking the fight to the horde of leading Holden outfits in this year’s V8 Supercars Championship Series.

With that responsibility comes expectation, but the Orrcon Steel FPR driver says that he’s feeling no extra pressure going into this year’s championship.

“It’s not pressure. It doesn’t matter what badge is on the car. You want to beat everyone,” he told Speedcafe.com.au.

“It’s going to be even more special to win this year, if we can, considering the numbers from the Ford side being low.

“I see it as an opportunity, not pressure.”

If there is pressure, though, Winterbottom says that its on HRT and TeamVodafone.

“There’s probably more pressure on the other guys out there like Triple Eight and HRT because they obviously want to be battling for Holden supremacy,” he said.

“We’ll keep doing what we do, and I’m pretty confident we’ll go well this year.”

Winterbottom shook down his brand-new FG Falcon at Winton during the week and said that the addition of Campbell Little as his race day engineer for the season has lifted his enthusiasm for 2010 to a new level.

“Having Campbell onboard relieves me of a fair bit of pressure because my confidence is high,” he said.

“This is probably the hungriest I’ve ever been going into a season. I’m confident driving the car, and with the test we did at the end of last year, I feel really good.”

Winterbottom will get his first ‘proper’ test at Winton this Monday where the team will officially unveil his and team-mate Steven Richards’ new colour schemes.