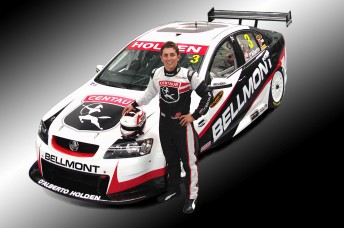 Tony D’Alberto has unveiled his new look for 2010 – the Centaur #3 Holden Commodore.

The Victorian enters his third V8 Supercars Championship Series with the same chassis that he first ran in 2008 – the year after he won the Fujitsu V8 Series.

However, this is the first year that he races without major support from The Bottle-O.

D’Alberto has purchased his own Racing Entitlements Contract for this year after splitting ties with Rod Nash Racing. He will race in the distinctive colour scheme, which bares some resemblance to his 2005 Fujitsu V8 colours – which was also the foundation year of Tony D’Alberto Racing as a V8 team.

“In 2005 the same colours marked the first year that TDR ran its own team, so for me it was important to get back to our grassroots. With our own REC, it was a natural decision to race in these colours again.”

The new design features a clean look with major sponsors Centaur, Bellmont and D’Alberto Holden all taking a leading role.

“We have taken a fresh approach and gone with a very clean and distinctive look. The car looks really cool and there’s no doubt you’ll see some more sponsors joining us very soon,” said D’Alberto.

“We’re very focused on building relationships for the future.”

Centaur is the manufacturer behind Victoria Police’s new divisional vans, a major project that is taking place during 2010 and beyond.

Bellmont, a long time supplier to HSV and FPV, continues its support of the team, while D’Alberto Holden highlights the support for the 24-year old driver in the Echuca-Kyabram region of Victoria.

Additionally, Centaur Racing will work closely with Walkinshaw Performance in 2010, gaining input with an engineering agreement.

D’Alberto will get his first drive this year of the #3 Commodore at Winton in V8 Supercars’ official test day on Monday.