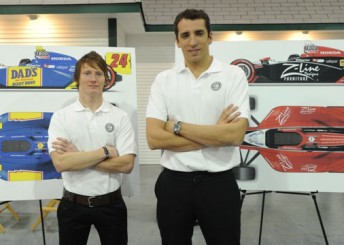 Wilson, who won the Watkins Glen race last season and was unlucky not to take other race wins with the underdog Dale Coyne Racing squad, will move to D&R’s #22 car along with the Z-Line Designs sponsorship, which backed Wilson’s DCR entry in 2009.

Wilson will race alongside fellow Englishman Mike Conway at D&R, with Conway staying with the team for his second year in IndyCar with the continued backing of Dad’s Root Beer in the #24 car.

Wilson is one of the most respected drivers in the IndyCar Series field, taking race wins in 2008 with Newman-Haas-Lanigan Racing as well as last season. While rumours had linked the lanky driver to top teams over the off-season, he will again aim to punch above his weight with a smaller operation.

“I believe that we will be very competitive and my aim is to win the championship,” said Wilson.

“I know it may seem steep, but I feel that we have a very good chance and I’m ready to win some races.  I also think that it’s great that Z-Line Designs has chosen Dreyer and Reinbold Racing and I really look forward to working with them for a second year. It’s going to be a good season.”

Team co-owner and Versus TV analyst Robbie Buhl said that his operation was in a strong position heading into 2010.

“I think this is the best focus we’ve had in years,” said Buhl.

“It’s been a long time since we’ve been in a position to have two very competitive entries and we couldn’t be happier. We are ready to win some races and really feel that we can do it with Justin and Mike. They are exceptional drivers and we are thrilled to have them on board with us.”

Wilson’s seat at Dale Coyne Racing looks set to be a race between a couple of young and fast American drivers in Graham Rahal and 2009 Indy Lights champ JR Hilderbrand.

Coyne has backing from the Boy Scouts of America in 2010 to commemorate the 100th anniversary of the BSA.

A young, fast American driver would fit that sponsorship well, and with Rahal out of contract at Newman-Haas-Lanigan as that team still searches for sponsorship, Coyne has admitted to RACER Magazine that Rahal is the favourite for the drive.

“Obviously Graham Rahal would be our first candidate, for both his speed and the image we’d want to portray for the #19 car,” Coyne told RACER.com.

“Graham’s a proven winner who matured a lot as team leader at Newman-Haas-Lanigan Racing last year.”

IZOD IndyCar Series teams will hit the track on February 24-25 for an open test at Barber Motorsports Park in Birmingham, Alabama.