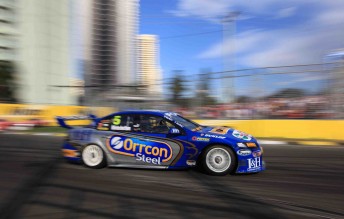 V8 Supercars Australia will promote the Surfers Paradise street race for the next two years and plan to incorporate the most radical two-driver per-car endurance race ever seen in the category.

After the disastrous A1 Grand Prix debacle last year where the category failed to turn up, The Gold Coast Bulletin reports today that the Surfers Paradise street race will be run by V8SA, the track will be shortened and international drivers will be used by the V8 teams in a unique format.

The proposed format would see two 300km races at the famous Gold Coast race, with two drivers used in each car – including at least one international driver per team.

According to The Bulletin, negotiations are underway with about 15 world-renowned motor racing drivers, with former Formula 1 and Indy driver Mark Blundell and 1997 Gold Coast Indy winner Scott Pruett locked in to compete.

V8 Supercars chairman Tony Cochrane said that the new format is a way to keep the Gold Coast race international.

“We have signed some really big international names to be a part of this weekend,” said Cochrane.

“It really internationalises the event here (and) in their home countries it gives all of their media a great story to focus on their drivers being out here for that weekend which obviously helps us as well with our international ratings.”

To read more on the international driver component CLICK HERE

To see the new, shorter version of the track CLICK HERE

A press conference will be held in Brisbane today, confirming more details on the wild new format.