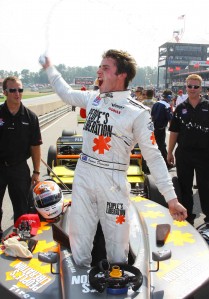 Davison, 22, who has spent the past five years racing open-wheel cars in America, will get his first test of a V8 Supercar this Monday at Winton Motor Raceway, driving the #30 Gulf Western Oils Commodore VE.

While his American plans for the 2010 Indy Lights series are not locked away, he told Speedcafe.com.au that with no date clashes between the Indy calendar and the two V8 endurance races, he feels he’s capable of tackling Bathurst.

“I definitely feel that I’m ready to take the challenge of driving a V8 Supercar now,” he said.

“I’ve raced overseas for five years and I’ve had poles and wins and finished second in the IndyCar feeder championship, and I’ve obviously gained a lot of experience and confidence out of that.

“There are no clashes this year with the dates, so it’s possible that I could do the endurance races. But I’ll do the test first and wait and see what happens. I’d love to race at Bathurst.

“I’ve spent my time building my profile in the US, and that’s where my dream and my focus is at, but with the endurance races not clashing with the 2010 IndyCar calendar, it makes sense for me to take advantage of any opportunity that I’ve got here in Australia.”

Davison, the younger cousin of V8 Supercar stars Alex and Will, is part of the Davison racing dynasty. His grandfather Lex Davison won the Australian Grand Prix four times before his fatal crash at Sandown in 1965, Lex’s sons Richard (father to Alex and Will) and Jon (father to James) both successfully competed in open-wheel racing in Australia, and now, Alex and Will drive for factory-supported teams in the V8 Supercars Championship Series.

James competed briefly in Australian junior open-wheel competition before heading overseas, and his drive of a V8 Supercar next week will be the first race car he has driven in Australia since 2005.

Davison has only been allocated a small amount of laps during his test for debuting V8 team Lucas Dumbrell Motorsport, but said that he wants to make the most of it.

“I’ve got limited laps allocated in the car, but I want to make a good impression, which isn’t necessarily setting the fastest the lap time,” he said.

“I’ll just go in with the right frame of mind, and I’ll just bare in mind that I won’t have the most amount of laps in the world, and the team knows that also. It will be good to get a feel for the car, and after a couple of laps, start getting it going once I have the right feel for the braking, downshifting and how heavy the car is.”