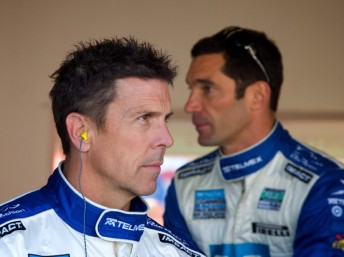 The twin 300km races at the Gold Coast event will see two-drivers compete in the same car, with an international racing driver compulsory per team.

It means that 17 international drivers will suit up for the V8 races – most of whom are likely to be V8 Supercars debutants. 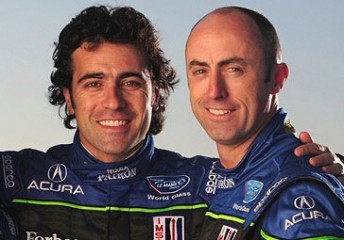 Dario Franchitti, left, would love to race a V8 Supercar at Surfers Paradise. He won the CART race at the track in 1999. David Brabham, right, is already locked in ...

Five international drivers have already been confirmed for the race, with more to come in the coming months. The final 17 drivers will be announced at the Supercarnivale launch in April.

Australian Le Mans 24 hour winner David Brabham is one of the first international stars to be locked in, and he is excited to get back into the V8 Supercar.

“Unfortunately I have never had the chance to race on the Gold Coast before, but all that is about to change,” he said.

“The event is well known around the world and it has always been of extra interest to me because the Gold Coast is home to most of my family.

“It is one of the world’s toughest street circuits and attacking it in a V8 Supercar will be no easy task, especially for those who will be driving one for the first time. Fortunately I have done a few laps in a V8 over the years and I am looking forward to getting out there.

“I have a full season of ALMS racing for Highcroft Racing ahead of me in the US and other selected events, including the Le Mans 24 Hour, but then we head home for what should be a terrific week.”

Pruett, who competed at Bathurst with Stone Brothers Racing in 1997 (and also won the Champ Car race that year at the Gold Coast) said that he the street track is a personal favourite.

“The Gold Coast and the October event have been synonymous with the world’s great motorsport events for many years and it is fantastic that this concept has been put together for its 20th anniversary celebrations,” he said.

“This will provide a real rejuvenation of the event and take it back to the glory days of the late 90s and early 00s. I loved my years on the Gold Coast, especially my victory in 1997.

“My drive in a V8 Supercar at Bathurst later that year was a great experience and one I am looking forward to repeating. I don’t need any excuse to come to Australia, so when I received a call to be part of this program I jumped at the chance.

Fittipaldi will return to the circuit which he holds mixed emotions for. In 1997, he broken his leg in a massive first turn chicane – but he still considers it one of the best tracks in the world.

“To have the chance of getting behind the wheel of a V8 Supercar on the streets of the Gold Coast will be fantastic,” Fittipaldi said.

“It is no secret that the Gold Coast was one of my favourite events anywhere in the world and I was fortunate to be a part of it through the most recent glory years of US open-wheel racing in the late 90s.

“I believe this concept, combined with the venue and enthusiasm of the promoter and fans, will make it one of the most desirable events in the world for any driver.”

With five drivers confirmed, there remains a lot of seats left, but no shortage of interest. The only major championships around the world that have a schedule clashes is Formula 1 and NASCAR.

This opens up the opportunity for drivers from IndyCar (Will Power, Ryan Briscoe, Dario Franchitti, Dan Wheldon etc) to compete, as well as World Touring Cars (Yvan Muller, Alain Menu and Andy Priaulx).