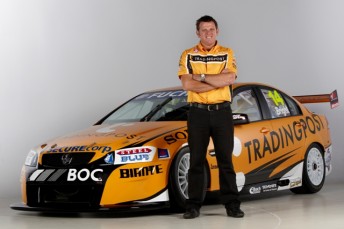 The Albury-based team has had a busy off-season, with the recruitment of Bright, a new engine supply deal with Noonan Race Engineering, the completion of a new chassis for Richards and the expansion to a third car for West Australian Karl Reindler. The Richards and Reindler Commodores are expected to be revealed later this week.

Bright brings a wealth of experience to the BJR squad, as this is the sixth V8 team that he has driven for in his career. The 36 year old has driven for the likes of Stone Brothers Racing, Holden Racing Team, PWR Racing, Ford Performance Racing and Britek Motorsport,

To date, his best result in the category is his victory in the 1998 Bathurst 1000 with Steven Richards. Now, he wants to add a championship to his list of achievements, and he says that the new Trading Post Racing Commodore is capable of helping him achieve that.

“It’s fantastic news and a huge coup to secure Trading Post as naming rights sponsor for the #14 VE Commodore,” he said.

“The Brad Jones Racing Team have put a strong package together and with Trading Post’s support, I believe we now have all the ingredients in place to make a real run for this year’s V8 Supercar Championship.”

Trading Post is no stranger to car racing, having supported a V8 Ute for Kim Jane in the past.

“With automotive being such a significant part of our business, it made sense to get behind a V8 Supercar team and be involved in one of Australia’s most popular national sporting competitions,” Padden said.

“The launch of Trading Post Racing is an exciting opportunity for us and we can’t wait to work with one of V8 Supercar’s most experienced teams.”

Bright will get his first drive of the Trading Post Racing Commodore VE at the Winton Raceway this Monday.