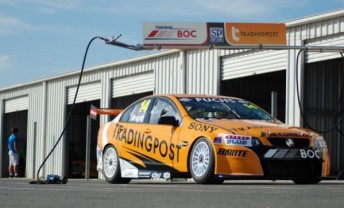 Jason Bright says that his first test in the Trading Post Racing Commodore at Winton Raceway this Monday will be vital to how early success comes.

Bright told Speedcafe.com.au that he has no doubt he’ll be able to run at the front of the V8 Supercars Championship Series field, however, the test will dictate whether the #14 orange Commodore will be competitive from the first round at Abu Dhabi.

“The way I look at it, I can’t say I’ve even gone into a year where I’ve had all the right ingredients,” he said.

“We’ve got a competitive car, a competitive engine, a good engineer that I know I work well with and a competitive team-mate. All of the ingredients are there, but it all depends on how the test goes.

“The team is on the way up. They’ve made a lot of changes. Whether we can turn it on immediately remains to be seen. Our early form will be critical on how the test day goes and then see where we’re at.”

If all goes well at the test, Bright says that race wins, and possibly the championship, are in his sights.

“I think we can have a good crack at this,” he said.

“It’s the most competitive season, for sure. Amongst the top four teams – Triple Eight, HRT, FPR and DJR – they’ve got consistency and stability. It’s only T8 that has changed to Commodore.

“All those guys should be going into the year pretty confident. There’s no doubt that this is going to be a very competitive championship. It will be a tough year.

“I think the equipment I have should be competitive, but it all comes down to whether you can make all of those small decision right – qualifying, shoot out laps, making the right set up changes, understanding the car – and that’s why the first test is so important.

“All the ingredients are there. It’s just a matter of how long it takes to turn that into results.”