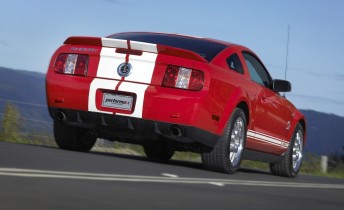 Jason Bright will race the Marcus Zukanovic-owned Shelby, similar to this model above, with third-driver Allan Simonsen in the Bathurst 12 Hour next weekend

Jason Bright will drive alongside Marcus Zukanovic and Allan Simonsen in the Team Action Racing Shelby Mustang GT 500 at the Armor All Bathurst 12 Hour Showroom Enduro next weekend.

It will be both the car and Bright’s debut in the 12 Hour race around Mount Panorama.

“I think the Bathurst 12 hour is a really good production car event and when you’ve got a car like I’ve got to drive around there for 12 hours, I think it could be a really great day. I’m looking forward to the challenge,” he said.

It’s been a big few days for Bright, who today released the first pics of his new V8 Supercar. But before he gets to race his Trading Post Commodore VE at Abu Dhabi, he has a different beast to master.

“Obviously this is a very different mindset to the sprint races I’m more used to,” he said.

“You do have to nurse the car along a lot more. Also I haven’t done a race in a production-based car before so there’s probably as much for me to learn as anything. We’re certainly a bit of a dark horse. I think the car has lots of potential but we’ll have minimal track time before we go to the event so we’re going in a little bit blind.”
The car owned and built by Michael Zukanovic is currently reaching its completion at the Zukanovic’s Melbourne workshop. Marcus says that he has the drivers to beat the dominant Mitsubishi Evos, but the jury is still out on the car …

“Since we received the car we’ve focused on building a really strong outright package. We’re hoping it will deliver the goods,” he said.

“I also wanted a draw-card lineup and we’ve got that with Allan and Jason. It was really important for me to have guys like that along. They will be super quick and have significant experience with enduro events.

“We believe the Mustang has the potential to put those turbo 4WD cars back in their box and entertain the crowds.”

The Armor All Bathurst 12 Hour Showroom Enduro is in its fourth year, and with a grid of 46 cars entered, it’s set to be the most competitive race yet. The meeting will be run on February 12-14.