Massa fastest in Day 1 at Valencia

Massa fastest in Day 1 at Valencia 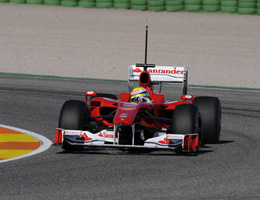 Ferrari's Felipe Massa was the fastest in Day 1 of testing

Ferrari’s Felipe Massa has set the fastest time in the first of three days of testing at Valencia, yesterday.

Seven teams have convened at the Cheste circuit, near Valencia, with Massa the first to give Ferrari’s new F10 its track debut.

The Brazilian driver worked mainly on defining a baseline set-up for the new car and on analysing the behaviour of the new Bridgestone tyres. Massa covered 102 laps, the quickest in a time of 1m12.574s – the best of the day.

Also at Valencia, Williams debuted its FW32 at the Spanish track. Rubens Barrichello opened the test, covering 75 laps and setting the sixth fastest time of the day with a 1m14.449s. Barrichello will continue work with the car tomorrow while Nico Hulkenberg will take over testing duties on Wednesday.

Barrichello said that getting back behind the wheel of an F1 car with a new team was like the first day back at school. 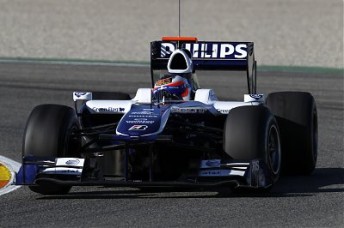 “I enjoyed today, it was like a first day at school!” he said.

“You can’t predict anything from the times and probably won’t be able to for the remainder of the tests because of the fuel loads people will run with such big tanks. It probably won’t be until Bahrain qualifying that we will see where everyone is.

“We are working on improving the balance of the car, but it’s running reliably, despite the small issue with the throttle. As everything is new, it was a good day.”