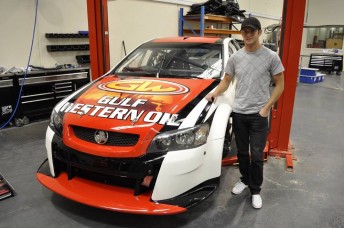 Daniel Gaunt is making his full-time debut in the V8 Supercars Championship Series this year for Lucas Dumbrell Motorsport – and he’s serious about making a good impression.

So serious, in fact, that he’s driving 250 kilometres up the Hume Highway from Melbourne to Winton to watch one of the leading teams test.

Gaunt has gone on a road trip to Winton to be a spectator at the second day of the Toll Holden Racing Team and Walkinshaw Racing’s test – just to get a feel for how the big teams do it.

But Gaunt is definitely not a rookie in the V8 class. He made his debut for Team Kiwi Racing in the final two rounds of the 2008 Championship Series. Last year, he competed in the Fujitsu V8 Series and drove with Stone Brothers Racing in the endurance races. 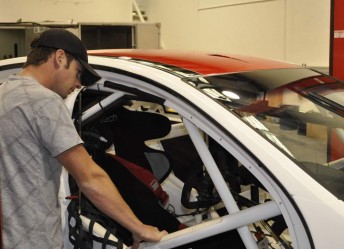 Gaunt takes a closer look at his new race car

So, for someone with a good level of V8 experience, why go to the trouble of travelling to Winton to watch a rival team test? The 24-year-old told Speedcafe.com.au that any advantage he can get at this stage of his career is a bonus.

“I’m just going up there to watch and see how it all happens,” he said.

“I’ll see what lines they are doing, see where they’re braking, go for a bit of a wander around the track. Obviously, I raced there in the Development Series, but it will be interesting to see how the big Holden teams go about their business.”

Gaunt, originally from New Zealand, has lived on the Gold Coast for the past few seasons, but has moved to Melbourne and will initially reside with former full-time Walkinshaw driver David Reynolds. The pair has been team-mates for the past two seasons in the New Zealand Porsche series.

While Gaunt gets used to living in Melbourne, he’s spending more and more time at the LDM workshop.

“It’s a good shop with a good bunch of guys.”

The Kiwi is realistic about his expectations, although he does recognise the potential the team has.

“We’re a new team, and I’m new to the series full-time, so I think if we can get a top 10 towards the end of the year, that would be terrific. Initially, we want to be working towards the top 15 on good weekends,” he said.

“It’s tough, but with the equipment we’ve got, there’s no reason why we can’t be in the top half of the field.

“It’s just a matter of everyone gelling together. The test next week is going to be important. It takes time to build a team and we’ve got to work out how it’s all going to work. All the right ingredients are there – the personnel, the car, and the engine. On paper, it’s A-Grade.”

Gaunt will get his first drive of the striking Gulf Western Oils-backed Commodore VE at Winton next Monday at the official V8 Supercar test.