The TeamVodafone Commodore VE has been revealed in Sydney today, featuring a similar (but different) colour scheme to the team’s Vodafone-backed Fords that it has campaigned for the past three seasons.

The Triple Eight-built Commodores maintain the flouresent red colours with silver, however, silver is now the most dominant colour on the bonnet and boot. Also, black flashes appear on the doors.

“The car looks good in its war paint. It looks sensational,” he told Speedcafe.com.au.

“I’m pleased with the way the cars have come together.” 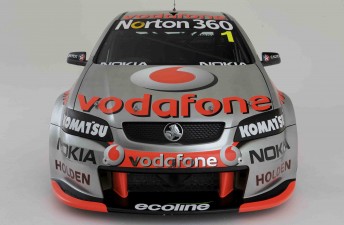 Vodafone announced mid-last year that it would stay with the champion team for another three years, and marketing director John Casey said that the new scheme is fitting for its renewed association with the team.

“The new TeamVodafone livery is the cutting edge of V8 Supercar design, ﬁt for a multiple championship-winning V8 Supercars team,” he said.

“Vodafone is delighted to continue its long standing relationship with TeamVodafone. We look forward to seeing Australia’s number one V8 Supercar team battle it out for a third-consecutive V8 Supercar Drivers Championship title behind the wheel of Holdens.”