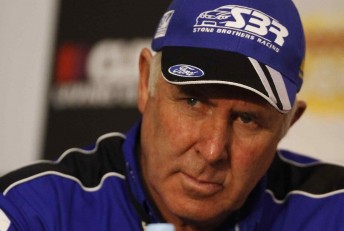 Stone Brothers Racing team principal Ross Stone says that it’s time for his Ford outfit to step up and relive the glory days of his once dominant team.

Since winning three-consecutive championships between 2003 and 2005 with Marcos Ambrose and Russell Ingall, the team has amassed just one race win.

After SBR launched its newly-expanded three-car team at its Yatala, Queensland-base last Friday, Stone told Speedcafe.com.au that 2010 is the year to get back to the front of the pack.

“We’ve had a frustrating couple of years and I really think it is time to step up. There’s plenty of people blowing their trumpets about what they’re going to do this year and what they’re not going to do.

“We’ve done some hard work over the off season. We’ve set out our expectations and I think they’re achievable.”

Stone says that the priority for his three drivers – Alex Davison, Shane van Gisbergen and Tim Slade – is to improve on the team’s form in qualifying.

“The first thing that we’ve got to try and do is lock in consistent qualifying,” he said.

“We need to qualify in the top 10, and then you start to look for a few podiums. And you need to keep those finishes ticking over – like Shane in the last two rounds. His points were fourth overall for the weekend. If you have that sort of result every weekend, you end up looking good in the championship.

“If you finish every race, finished fifth and sixth, you can win the championship, but the thing that you’ve got to do is consistently qualify in the top 10, and then podiums will come.”

Stone admits that too many years have passed since his team was in winning touch.

“We should have had better results, really,” he said.

“It does feel like a long time ago, but you have to keep reinventing yourself, and I guess that’s what we’ve done, and I feel we’re in better shape now than we’ve been for a long time.

“We tried with James (Courtney), but after the crash at Adelaide with (Craig) Lowndes (in 2008), the chemistry was gone and was never the same.

“Last year, for me, was a rebuilding phase. Shane is still so young – he’s still only 20 now, and this will be his third season. And with Alex, he has the pedigree, and he’s had the one year behind him, so we definitely need to step up to the plate.

“And we think Tim Slade is going to surprise. He tested well, he has the right attitude and it’s a good way to start the year.”