The 2010 V8 Supercar season officially kicked off at Winton Motor Raceway today, with the Holden Racing Team and Walkinshaw Racing hitting the track in the first of two test days.

New Bundaberg Red Racing recruits Fabian Coulthard and Andrew Thompson tested their Commodores – with Coulthard’s #24 car displaying ‘Bundaberg Red’ signage, and Thompson’s #10 car in the ‘Extra Smooth’ livery that both cars will use in the Middle East due to strict alcohol branding restrictions.

Garth Tander and Will Davison were also at the rural Victorian track in their Toll Holden Racing Team Commodores. 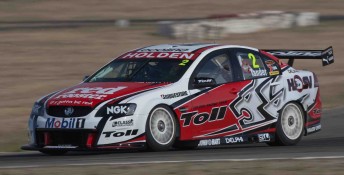 The HRT and Bundaberg Red cars have tested a week earlier than the rest of the southern-based teams as they are required to head north and fly to the Middle East from Queensland, as part of the rotational fly-away system.

Coulthard, who will have experienced engineer Rob Starr as his man behind the fence this year, was happy with his first day with his new team.

“So far everything has been going well, we have been evaluating a few sets of tyres and seeing what works and what doesn’t, but on the whole I am getting more comfortable in the car every lap we do,” Coulthard said.

“I think we are doing the right thing by starting the year off with two test days, especially for Andrew and I who are new to the team and it is valuable experience.

“It is good to get familiar with everything, try a few changes and get a solid read on our progress. Rob Starr is a top lad and easy to get along with which will be an integral part to our success this season.”

Thompson was glad to finally get into the car – his first Main Series V8 drive since 2008 with PWR Racing.

“Today has been great so far, it has been good to finally get in the car for 2010” Thompson said.

“We are only a month into the year but it has felt like about three months so it is a relief to get into the car despite the heat today.

“We are running through our program to try a few different pieces and try to iron out any little gremlins. Having two days at the start of the year allows me to get a handle on the car and work up a good relationship with Erik (Pender, car #10 engineer) and Joe (Sasso, car #10 data engineer).”