Winterbottom and Eckstein take out Men of Steel Challenge

Winterbottom and Eckstein take out Men of Steel Challenge 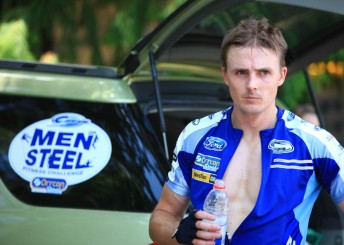 The Challenge formed the final two days of the annual FPR fitness camp with Winterbottom and team-mate Steve Richards lining up with team-mates Paul Dumbrell and James Moffat alongside a group of triathletes.

Grouped into teams of two they competed across 14 stages incorporating a rock climbing challenge, a one-kilometre swim, over 15km in running and 50km in cycling legs, an 11 kilometre kayak across the Hinze Dam and a 90m abseil near the Binna Burra Lodge in the Gold Coast Hinterland.

After overcoming a five-minute deficit at the end of the opening day to the pairing of Richards and Brad Dalrymple, it was Winterbottom and Eckstein who came through to be crowned the winners of the inaugural FPR Men of Steel Challenge presented by Orrcon Steel. “Most people think that we sit on our backside and drive a car and that’s it. I think a lot of the athletes got a new appreciation for the fitness levels involved in our sport. It was also great to be pushed along by the other athletes at some stages of the challenge.”

For Winterbottom, the training camp is what ‘flicks the switch’ to confirm that the V8 season is just around the corner.

“I find that the training camp really gets you ready mentally for the season ahead,” said Winterbottom.

“Physically we are all in pretty good shape but mentally some of the stages in the challenge seemed impossible but somehow you got through it.

“It will be around lap 60 at Clipsal when I will really feel the benefits of this challenge. When there is still 18 laps to go and you’re exhausted but you put yourself back into the mode when you were going through a hillclimb at the training camp, you just keep pushing and get through it.”

Eckstein thoroughly enjoyed the challenge and the new experiences that came with it.

“The challenge was a great experience for me, I’d never done any abseiling or rock climbing before so that was pretty cool,” said Eckstein.

“In the end we had some team tactics going on to make sure we got through for the win. It was great to be able to meet all of the drivers and see how fit they are.

“Mark and I are a part of history now, we took out the first trophy and look forward to being back next year to defend our crown.”

Winterbottom and Richards will take to the track in their Orrcon Steel-backed FPR Falcons for the first time in 2010 during a test day on February 8 at the Winton Motor Raceway in Victoria.