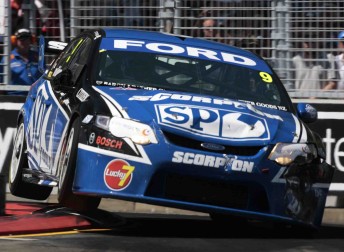 Ahead of SBR’s official 2010 launch, team principal Ross Stone says that the sport’s growth has helped secure the introduction of a new sponsor.

“It’s always great having a new sponsor come on board for both Stone Brothers Racing and the series,” Stone said.

“The business of V8 Supercars is extremely strong and provides an excellent platform for both brand awareness and loyalty. I believe this to be the start of a long mutually beneficial relationship and we are really looking forward to working with Lucky 7 and making them feel part of the team.”

At the Sydney Telstra 500 last year, Shane van Gisbergen’s SP Tools Falcon FG displayed Lucky 7 logos on the front bar as a toe-in-the-water sponsorship, and now, the company has decided to extend that deal.

Lucky 7 logos will appear on the rear quarter panel of all three cars.

“As a national convenience store banner we look forward to offering our Lucky 7 members in every state the opportunity to further expose their brand to the consumer market through the strong medium of V8 Supercar motor racing,” he said.

“We have no doubt that our members will benefit from this exciting marketing initiative.”