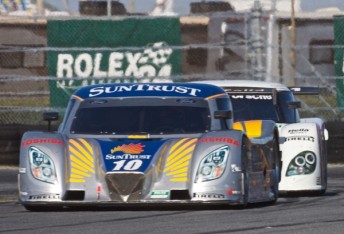 It was a great day for Ford-powered machinery, with Blue Oval teams scoring the first three spots on the grid in the Grand-Am Rolex Series field.

This is the first time Angelelli will start from the pole for the Rolex 24 hour race at Daytona International Speedway. Today’s pole was the 11th for SunTrust Racing since it joined the Rolex Series in 2004.

“We wanted this pole,” said Angelelli.

“Of course, in racing, you have to make things happen, and we worked hard for this pole, preparing ourselves and the car.

“There is an advantage starting up front, no matter how long the race is. It was important for all of us. For me, I can’t deny it. It’s important, the Daytona 24-hour, with all the cars, all of whom are racing at a very high level.

Starting alongside Angelilli is Oswaldo Negri, driver of the #60 Ford Riley. Negri is teamed with Burt Frisselle, John Pew, and Mark Wilkins.

The story of the day from Daytona was NASCAR champ Jimmie Johnson, who crashed heavily in the #99 GAINSCO Chevrolet. 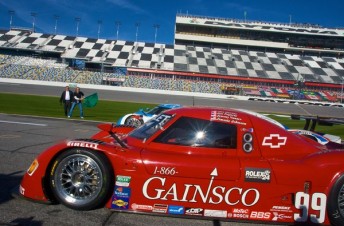 The #99 GAINSCO Chevrolet-Riley ... before it was all-but-destroyed by Jimmie Johnson. Luckily, Jimmie has commissioned one of his personal jets to fly new parts to Daytona

“I put myself in a position with a GT car that I shouldn’t and paid the price,” said Johnson, who was uninjured in the incident.

“I hate it that I tore up equipment and put the guys in this spot. It looks like we will get this fixed and hopefully everything will be good for tomorrow.”

After Alex Gurney ran the opening laps of the weekend’s first practice session, Johnson took the wheel of the No. 99 ‘Red Dragon’ and immediately began turning competitive times in his first on-track action of the year.

Late in the run, Johnson was passing a slower GT entry that appeared to have given him the line in the fast run through the infield ‘kink’ only to have the other car move over on the GAINSCO machine. Johnson spun off track and the car made heavy contact when it backed in to a safety barrier.

The initial inspection of the damaged No. 99 team revealed a severely bent rear bulkhead in the engine compartment area. The GAINSCO team was thought to be done for the weekend but the team later determined a repair was possible after consulting with personnel from chassis constructor Riley Technologies.

“After reviewing several options we made the decision to repair the car,” said Team Owner Bob Stallings.

“Our first plan was to bring our No. 98 back-up car from our shop in Texas but that would have required some all-night driving and then a marathon preparation session. The crew will still have to work most of this evening but ultimately repairing the No. 99 was the best choice.”

The extensive repair will basically center on replacing the angular U-shaped bulkhead at the very back of the Riley. The damaged part of the car will be removed and the replacement chassis components and a jig that will be used in the installation were being flown from Riley Technologies headquarters in Charlotte to Daytona early Thursday evening on one of Johnson’s airplanes.

After the new structure is in place, the GAINSCO team will then have about five hours of additional work ahead of them. If all goes to plan, they will be able to participate in Friday’s first scheduled practice session at 9 a.m.

“We should be fine,” Gurney said.

“It was a tough opening day, for sure, but we have been up against it before. I got to run a few laps in the morning and the car seemed pretty good. We have it the way we want to run it in the race and we should be OK, but it is going to be a long night for the guys.

“The crew is basically doing a 24 hour before the 24 hour but we are working on a way to get them some sleep early tomorrow afternoon. So they will get in a little bit and definitely it will be a long weekend for those guys, but hopefully we will be smiling at the end of it.”

Jon Fogarty and Jimmy Vasser didn’t get a chance to drive Thursday as the team missed both qualifying and night practice but joined the rest of the GAINSCO team in staying optimistic.

“GAINSCO/Bob Stallings Racing is a champion team and this just gives us a chance to prove it.”