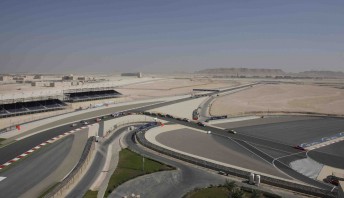 V8 Supercars won’t race on the circuit that the Bahrain Formula 1 Grand Prix will be held on this year … sort of.

Formula 1 has announced that it will race on the longest variant of the track, extending it to a 6.3km circuit.

The extra section of the Sakhir circuit will see the F1 cars take a slower left turn at turn five, another slow right-hander (turn six), an even slower left (turn seven) before a tight double-right and two more new corners (right/left) which leads back onto the original turn seven, which will now be a long Turn 12.

The second round of this year’s V8 Supercars Championship Series at Bahrain will use the old Grand Prix track, which measures at 5.41 km. It will be the first time that the Grand Prix track has been used by the V8s after competing on a shorter course since the category debuted there in 2006. V8 Supercars operations manager Kurt Sakzewski confirmed to Speedcafe.com.au that the new Grand Prix layout would not be used for the V8 meeting.

“While we are there, we’ll probably have a look at the longer track. If F1 are using it, it’s worth seeing what it’s like.

“If we did race on the full track, it would mean that it would be the longest circuit on our calendar, and I’m not sure that’s the path we want to go down at this stage.

“But you never say never. We’ll certainly look into it, but for the time being, we’ll race on the old Grand Prix track.”

The second round of the V8 Series at Bahrain – the Desert 400 – is scheduled for February 25-27, while the F1 season kicks off at Bahrain on March 14.