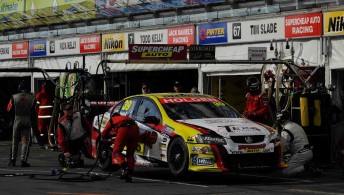 There will be more V8 Supercar racing on Saturdays in ‘Sprint’ race meeting formats this year.

Saturday’s races have been bumped up from 100km to 120km, with the intention of ensuring that teams have to complete their compulsory fuel stop. In the 100km races last year, cars could have (in some cases) finsihed the whole race with no stop, thanks in part to the improved fuel economy that teams are now able to generate.

“We’re all still going to be striving for the best fuel economy, pit strategies and fuel windows, so it’s a little bit pointless, I reckon,” he said.

“But I think what it does is gives the people that come to the circuit on Saturday more of a chance to see the cars. It’s only 20km, so it’s not that big of a deal, but for the fans, it’s a bit extra.

“For those there at the circuit, they get more of what they’ve come to see, and that’s on-track action.”