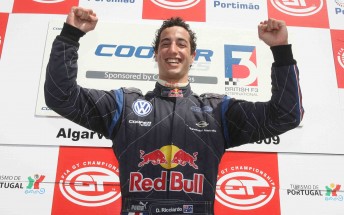 Australia has another Formula 1 driver.

The pair will alternate on their reserve duties through the year, working closely with the Red Bull and Scuderia Toro Rosso teams, sitting in on team meetings, take part in off-track activities and prepare to race should they be called up.

Ricciardo said that he wasn’t sure if he was going to secure the role.

“It’s very exciting. It was an email I was hoping for since the test in December, but I wasn’t sure whether it would come at all. So, a big relief, but also very satisfying,” he said.

“This will be a very good introduction to F1 – even though I won’t be driving the car, just to sit in on the briefings and do what the drivers do on a weekend is a good way to start learning. It’s all exciting and I’ll be busy, even though I’m not driving,”

Both Ricciardo, 20, and Hartley, 20, have been a part of the Red Bull young driver program for a number of years.

The pair was two of the outstanding participants in December’s rookie F1 tests at Jerez, Spain, where Riccirado was the fastest of all testers from various teams.

In other Red Bull Racing news, the new team’s new car – the RB6 – will be unveiled in Spain on Wednesday, February 10.