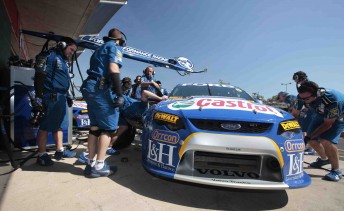 James Moffat is set to be Ford Performance Racing’s fourth driver this year.

Moffat had a deal in place to drive with FPR-supported team Matthew White Racing in the Development Series this year, but that agreement appears to have fallen through, and FPR looks set to come to Moffat’s rescue.

If the deal comes together, the 25-year-old will drive the ex-Ford Rising Stars Falcon owned by Jim Morton. The Falcon BF would be maintained by FPR as one of its official race cars.

Moffat, who will suit up with FPR in the endurance races at Phillip Island and Bathurst this year, is currently on a boot camp with fellow FPR drivers Mark Winterbottom, Steven Richards and Paul Dumbrell. Moffat is also a full-time employee at FPR.

FPR team principal Tim Edwards told Speedcafe.com.au that no contracts were signed, but there’s a good chance that the deal will go ahead.

“There’s no contacts in place for any program, but it’s something that we’re contemplating,” Edwards said.

“I reckon in the next week, we might have more to tell to you.”

Edwards said that adding an extra car to the team’s race program isn’t a major hassle.

“It’s not a big undertaking. To do it, we’d end up having an extra mechanic on the payroll. We’ve got all of the infrastructure,” he said.

“We’ve got two b-doubles (truck trailers) that go to the race track, we’ve got a load of wheels that we don’t need because we’re changing to the control component. We’ve got many components to ensure that, at a pretty low cost, we can do the job. The infrastructure is already in place.”

Edwards, who also holds a position on the V8 Supercars Australia board, says the value of the Fujitsu V8 Series is significant to the sport as a whole.

“For every team, the Development series is important, not just for the drivers, but for the engineers and mechanics as well,” he said.

“It’s invaluable. A lot of people just think it’s an avenue to sell equipment. You’ve got to have access to up and coming drivers, engineers and mechanics. All three of those groups can’t go from Formula Ford into a V8 Supercar team, so we’ve got to groom them.

“It’s important for all Main Series teams to support the Development Series. Whether that’s supplying parts and equipment or engineering support, or whether it’s actually running a team. The category needs the Mains Series’ support.”