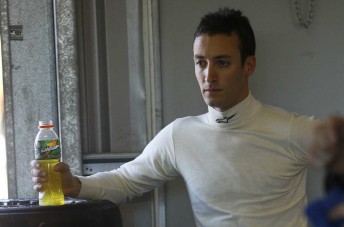 Geyer was Coulthard’s engineer on that exact car last year, and Fiore told Speedcafe.com.au that having someone with his experience – both with the car and the sport in general – is a huge plus for him in his second year of V8 competition.

“He has a great deal of experience, knowledge and professionalism,” Fiore said.

“He’s pretty switched on in all aspects of the game, so to have him in my corner is very reassuring. It’s going to take time for us two to gel. Obviously, it’s a very important relationship – engineer and driver – and it will take time for us to figure out each other and how we work.

“I’m getting to know all of our guys pretty well know, and I’m looking forward to hitting the track at Abu Dhabi.”

Fiore has set up the Triple F Racing team on the Gold Coast, even though he still resides in his home town of Perth.

Fiore drove a Paul Morris Motorsport-prepared Commodore VE last year, but says his own team is a great collection of experienced guys – most of whom have worked together before.

“I think it’s going to be interesting to see how everyone gels with our team,” he said.

“For me and for Triple F Racing, it is a new team, but in terms of the personnel, they’ve all worked together before and been in the game a long time. I expect to see us hit the ground running pretty strongly.”

Fiore also said that he has some bold expectations for the future.

“From a team perspective, I want to be in the top 20 threshold in qualifying. That’s my aim,” he said.

“My aim is to always be in the top 20 and aiming for top 10 finishes. I’m shooting for top 10s this year, and then next year and the year after, I want to be pushing for podiums.”