Dean Fiore, driving his ex-PMM Commodore VE last year. His brother Paul will drive it at the Clipsal 500 in the Fujitsu V8 Series

It’s one busy year ahead from of one V8 Supercar’s newest teams. Speedcafe’s Grant Rowley spoke to Dean Fiore about Triple F’s plans for 2010 …

QUESTION: How is your new team coming along?

DEAN FIORE: The team has come together well and everything is cooking nicely for the test day. We should be ready to rock and achieve what we want to achieve this year.

My guys, in terms of the commercial side of things, their in meetings today and the start of next week with people, and we’re hoping to have an answer before the test. If everything goes to plan, we’ll have the liveries sorted for the test. 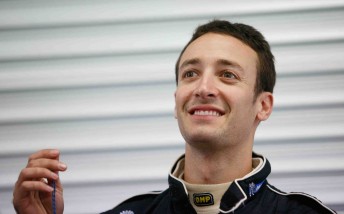 Q: So you’re confident that you’ll have a title sponsor for the season?

DF: Yeah, I’m confident. Quietly confident that we’ll have someone on board. I’ve got enough associate sponsors to definitely keep us going for the first part of the year, but obviously, the ideal scenario is to have the naming-rights locked in as soon as possible. We’ve got a few things bubbling away in the background as a back-up if that doesn’t come to fruition.

But yeah, on the sponsorship, everything is looking good. I’m happy with how it’s gone so far.

Q: When you get your Falcon FG to the test day on Feb 9 at Queensland Raceway, it will actually be your second drive of it …

DF: That’s right. We tested late last year as I still had a rookie day up my sleeve. It was fantastic. It’s a really good thing to steer around. The car still had its tongue hanging out from Homebush, to be fair. We just rocked up, made sure it had fuel in it and drove it around. The first indications were really, really solid. We’re looking forward to the first official test on the ninth and getting into the season proper.

Q: What’s your expectation for the year? What are you aiming for?

DF: I think it’s going to be interesting to see how everyone gels with our team. For me and for Triple F Racing, it is a new team, but in terms of the personnel, they’ve all worked together before and been in the game a long time. I expect to see us hit the ground running pretty strongly.

Q: You have Leigh Geyer (ex-DJR/Cruickshank) calling the shots for you as your engineer. He’s obviously got a lot of experience. What will he bring to your organiser?

DF: Exactly that – just a great deal of experience, knowledge and professionalism. He’s pretty switched on in all aspects of the game, so to have him in my corner is very reassuring. It’s going to take time for us two to gel. Obviously, it’s a very important relationship – engineer and driver – and it will take time for us to figure out each other and how we work.

I’m getting to know all of our guys pretty well know, and I’m looking forward to hitting the track at Abu Dhabi.

Q: What sort of research have you done on the first two rounds of the championship? You’ve never raced on either Abu Dhabi and Bahrain …

DF: I’m looking at onboard footage from YouTube. That’s basically what I’ve done to date. I’ve also been doing lots of laps on the computer. I know where the circuits go, and I know that there’s one little bit of the Abu Dhabi track that’s irrelevant, but it gives me a good idea of where I need to head.

(Felipe) Massa has a pretty good lap of Bahrain that’s on YouTube, so I’ve watched that quite a few times.

Q: Triple F is also entering a car in the Fujitsu V8 Series. How is those plans progressing?

DF: With everything that we’ve got in place with the Main Series stuff, it’s an easy proposition to deal with.

They (Paul and Todd Fiore) are going to share it for the first year. They’ll be at the first test days, most likely in the (ex-PMM) VE, because we don’t have quite enough spares for the FG – we’re leaning on our BF for parts.

They’ll do the first test day in the VE together. Paul (Fiore) will do Clipsal in the VE, and then we’ll move that car on and they’ll slide into the BF and probably go round-by-round for the year. Just take turns …

Hopefully, next year, if the corporate backing for the Main Series car is big enough, we might be able to enter two cars in the Development Series. That’s the early plan.

Q: In terms of livery, will the Development Series car look the same as the Main Series car?

DF: Yes. All the sponsorship deals revolves around two cars. We’re selling it off as a package. The biggest seller, obviously, is the Main Series car, so if we can find what we’re looking for there, then the Development car looks after itself.