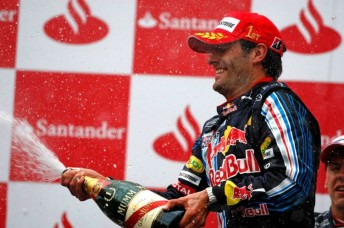 Former Formula 1 world champion Alan Jones says that his countryman Mark Webber will be a championship contender in this year F1 title.

Webber enjoyed the best season of his career in 2009, winning two Grand Prixs, taking his first pole position and finishing fourth in the driver’s points.

Jones, the 1980 F1 world champ, says that Webber will take confidence from his breakout season and build on it this year – and if all things work out right, the Red Bull Racing star could be world champion.

“He’s already displayed that he’s got the speed, he’s got the stamina, he’s very fit and he’s very consistent. They’re the things you need for a championship,” he told Speedcafe.com.au.

“Winning your first race is certainly a terrific moral booster and I believe that Mark drove with a lot more confidence after he won his first Grand Prix (in Germany). He had a handle on what to do and, providing Red Bull give him a good car this year, which I think they will, he’s well set at having a crack at the championship.

“He could get the job done this year. He certainly proved last year that he has the pace.”

In terms of competition, Jones admits that the 2010 season will be tough, but it will be no different to any other year.

“Formula 1 has never been easy. There’s always some bugger or buggers who will give you a task, because to get into F1, you’ve got to be very good and have a bit of mettle about you,” he said.

“There’s probably been some years that could be described as easier than others – but this year won’t be one of them.

“In general, Formula 1 is hard. It’s competitive. It’s not easy and this year is going to be no different.”