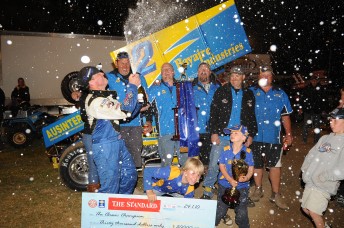 Stewart and Tatnell put on a show for the fans as they raced wheel to wheel for the most prestigious prize in Australian sprintcar racing, and the $30,000 winners cheque that goes with it.

The Indianapolis-based driver got the jump from the inside of the front row, after Tatnell elected to start from the outside as polesitter, behind the leading duo James McFadden was joined by Americans Danny Smith and Jason Johnson in an intense battle for the minors.

As the 40-lap main event reached the half way stage lead changes were a becoming regular occurrence with Stewart and Tatnell putting ‘slide jobs’ on each other while slicing their way through lapped traffic.  Such was the ferocity, and healthy respect, between the pair they ran centimetres apart at over 150 km/h without incident on several occasions.

Just after the leading pair made slight contact on the main straight, Jonathan Allard and Steve Lines both had their right rear tyres explode leaving Allard stranded in turn three while at the Lines upended his Camden Neon Signs entry at the same place.

This first caution period with nine-laps remaining set the scene for a titanic finish.

At the restart third placed Johnson fired his HM Racing entry underneath Tatnell for the runner-up spot through turns one and two.  The pair race side by side along the back straight before Tatnell held sway but it wasn’t long until the caution lights were on again with Garry Brazier stopping on the circuit with broken steering.

Once again Johnson looked to pass Tatnell on the restart but this time the Louisiana-native had moved to the high-side.  As the pair exchanged the runner-up spot on a couple of occasions it allowed Stewart to open a handy buffer that he held to the finish in the Colin Bulmer-owned machine.

“Honestly it hasn’t sunk it yet, it probably won’t until I lay my head on the pillow tonight,” said Stewart.

“Brooke (Tatnell) is a true champion and I can’t say enough about how good Aussie drivers are.

“My crew thought they were nervous for the final but I guarantee I was more nervous when Brooke got around me. It’s hard to maintain your speed as well as get around lapped traffic with Brooke breathing down your neck.

“This classic win race probably rates the highest out of all my achievements and like Brooke said earlier there’s no event like this anywhere else in the world.

“I really do have a great time every time I come here and everyone has been great, Colin and Kerry Bulmer and the kids, they are awesome to drive for. My hat goes off to the team and their sponsors including KRE, Bayair Industries and Campbell Cranes. I hope this Classic win is not my last one and I hope there’s more to come.”

After tagging the wall with a handful of laps remaining exiting turn two Johnson lost the battle for second to Tatnell, who was full of accolades for the victor.

“Shane’s a good racer and we had one hell of a battle out there tonight,” said Tatnell.

“We gave it everything we had and that wasn’t enough tonight, but we walked away knowing there was nothing left on the table and we’re not leaving with our heads hanging down that’s for sure.

“I hope the race fans enjoyed it tonight and I know a lot of drivers say it but I truly believe I drive for the best race team there is in the country, Shane, Jodie and the Krikke family.”

Western Australian Ryan Farrell was the hard charger late in the race to claim the final spot on the podium ahead of McFadden and Smith, who battled with brake issues late in the race.  Rounding out the top ten was Kerry Madsen, Johnson, Matthew Reed, Craig Dollansky and Stephen Bell.