Four of V8 Supercars’ leading drivers are currently on their way back from Abu Dhabi after spending the last four days in the Middle East promoting next month’s opening round of the 2010 V8 Supercar Championship Series.

Jamie Whincup (TeamVodafone), Mark Winterbottom (Orrcon Steel FPR), Will Davison (Toll HRT) and Paul Dumbrell (The Bottle O FPR) were the drivers hand-picked by V8 Supercars Australia to enjoy the whirlwind trip, which included completing laps of the Yas Marina circuit, visiting historical landmarks and having a ride in a two-seater Formula 1 car.

The Bottle-O’s Paul Dumbrell has given Speedcafe.com.au his exclusive Abu Dhabi Diary … Enjoy!

It was a pretty cool first day, even though I missed the best bit. The boys got to go wakeboarding and jet skiing. I wasn’t there for it, but the boys had a good day. They got to jet ski directly into the Yas Marina towards the circuit, which we were told is the first time it was ever done and a massive privilege.

We did some laps in a GT2 and GT3 Porsches and a Nissan GTR around the Yas Marina Circuit. We took some of the VIPs at the circuit around the track for hot laps.

The track is phenomenal. It’s a lot different to what you think. The track we’re using incorporates the corkscrew. It’s almost a 20 metre drop in road elevation! You go through two third or fourth gear fast corners, into a blind second gear rise, which drops down into a right/left and onto the back straight.

There’s the two long straights, and it will be interesting to see where they place the tyre bundles for our races, because at the moment, you’d be able to catch a few kerbs around the place.

After the back straight, you go through a very tight left/right/left complex, a triple right hander that are all off camber, past the Yas Hotel, which is awesome. Where we had breakfast at the hotel, we were overlooking the triple right hander! After that section of the track, you go underneath the hotel, and then it links back around to the main straight.

It’s a very picturesque circuit. To start with a blank bit of paper and end up with this, is absolutely phenomenal. The construction of the grandstands, the pit lane tunnel, the hotel, it’s just incredible. $1.2 billion dollars well spent! 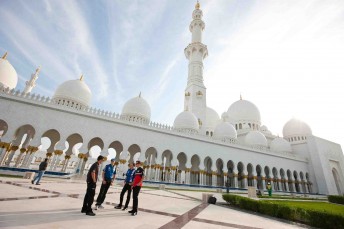 The four visiting V8 drivers stand outside the mosque

Later that day, we visited the mosque, we got to feed a Falcon, and visited the Emirates Palace, which is phenomenal. They had the top eight or 10 top architects from around the world all to design the building in a 25km radius. It’s the biggest entertainment facility in the world – from performing arts centres to museums, plus eight five-star hotels along the beach. It’s pretty impressive.

We had a very lucky experience to have a ride in the back of the two-seat Formula 1 cars, the old Minardis.

That was unbelievable. It was crazy. Everything you’ve ever thought about Formula 1, you have to times it by two. Everything it does, it does it better than you’d ever think. The horsepower, the downforce, the brakes, and how violent it is in the back. It was pretty incredible.

All-in-all, I think the trip was pretty successful. We were able to generate a bit of media out of it. We’ve had CNN do a couple of stories for the World feed, and a Channel Seven crew were here as well.

They’ve taken a lot of the photos of the stuff we’ve done everyday for the media back in Australia. It’s been a pretty special trip. It’s really to pump up the fact that we’re coming over here for the first round. And now, more than ever before, I can’t wait to get into the new season, starting at Abu Dhabi.