Borland’s most expensive Spectrum ever

Borland’s most expensive Spectrum ever 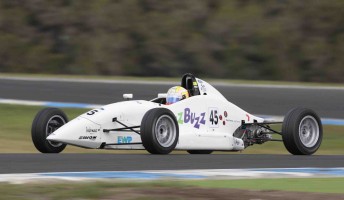 Ash Walsh, pictured driving last year's Spectrum, will get his hands on a brand-new Spectrum 012 for the 2010 season

Borland Racing Developments will unveil a brand-new Spectrum Formula Ford chassis this year – the Spectrum 012 – and it’s said to be the most money ever spent on the development of a new Spectrum.

Wind tunnel tests, body work improvements, suspension tweaks and minimum weight all equal up to the most financial input ever placed in a Spectrum – all in the aim of taking the all-Australian built chassis back to the top of the Formula Ford pile.

After losing the contract to the CAMS Rising Stars program, the factory BRD team is as keen as ever to win this year’s title and have hired the services of experienced Formula Ford racer Ash Walsh to drive the new car this year.

Walsh will be partnered by rookies Ben Jurczak and Caleb Rayner, with the latter starting the season in the older model Spectrum 011.

In total, five new Spectrums have been built, with two to be campaigned by BRD, two for Synergy Motorsport and the fifth to go to the United Kingdom to race in the British Formula Ford Championship for local driver Daniel Cammish.

Cammish will arrive in Australia soon to test the UK-spec car at Winton Motor Raceway.

According to BRD’s commercial manager Paul Zsidy, the new Spectrum 012 represents the next step in the continual progression of the Mike Borland-designed and built chassis.

“I would say in terms of dollar value, yes, this is the most money we’ve ever spent on a new Spectrum chassis,” he told Speedcafe.com.au.

“It’s also part of the evolution of our business. 20 years ago, Mike (Borland) didn’t have the money to spend, and as your business grows, you reinvest. The philosophy of BRD has always been to reinvest. You don’t see our team leaving the racetrack in the BRD yacht! Our aim is to keep the cars at the forefront.

“For the 012, we’ve had the facility to engage a few more resources on this. We’ve carried out some extra work on the chassis to confirm its torsion rigidity, and we’ve been able to play around with a few nice suspension packages to optimise the car’s performance and work on minimising weight. We’ve even further reduced the rotational masses in the car and lowered the centre of gravity.

“Again, we’ve incrementally improved every aspect of the car.

“It’s not a case of start over and reinvent. We’ve just honed the package that we’ve had in the past.”

The wind tunnel tests were conducted at the MIRA facility in the UK, and Zsidy says that there were a number of advancements made to the chassis in that process.

“They came up with a few things for us to try, and it proved that, while we minimise the front area (Spectrum’s have traditionally always had the pointy nose), it definitely has a positive effect on the car. We took the data from that and some of the things they recommended and put those into the new car. The things we’ve focused on, with the new bodywork was to improve airflow.

“You try reduce drag, so you clean up the lines of the car. The new engine cover is a lot tighter over the engine. What we had was very good, so we worked on keeping our lines as clean as possible, and the tests show that it should be an improvement. We’ve done it all by making it all a bit smaller, and that should help additionally.

“By doing that, we also improve airflow to the engine and over the engine so that everything makes it run better. The effects of that is that you end up with, theoretically, less drag, a happier engine, so we should be even better in a straight line that we have been in the past.”

Two of the new Spectrums are currently being delivered to Synergy Motorsport, and all of them will be ready to test soon before the first round of the Australian Formula Ford Championship at Albert Park, supporting the Formula 1 Grand Prix, on March 25-28.