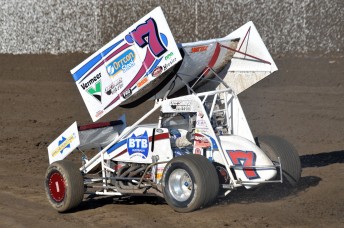 The Orrcon Steel-backed driver won the traditional lead-up event to the Grand Annual Sprintcar Classic ahead of Kerry Madsen and a hard-charging Grant Anderson.

After starting from the outside of the front row alongside American Paul McMahon, Farr got the jump at the start of the main event and despite Madsen ‘showing his nose’ on one occasion his lead was never seriously under threat.

“It was another one of those nights where almost everything went perfect.  I set quicktime, started on the front row for the main and went on to win,” said Farr.

“I got caught up in some lapped traffic at one stage which allowed Kerry to close in and I saw his nose there but I had enough speed to be able pull away once I had some clear track.

“The last few weeks has really been good, we’re back in a zone and everything we seem to do to the East Coast Pipeline machine is working well, even at Avalon where we finished fourth I was super happy with our speed.”

Farr’s focus now turns towards the biggest crown on the Australian sprintcar calendar, the Grand Annual Sprintcar Classic, to be held in Warrnambool over the next two nights.

“The Classic is one race that has always eluded me, we’ve had some good results in other events at Warrnambool over the last couple of years but never the Classic,” said Farr.

“Hopefully this recent run of form will help us to be in a good position for the next couple of nights.”

Madsen’s second place was another strong run by the former Australian Sprintcar Champion while Anderson’s run to third place was impressive.